Inventory management includes tasks for creating, updating, deploying and deleting inventory objects. When invoking the Configuration view the inventory is presented like this: 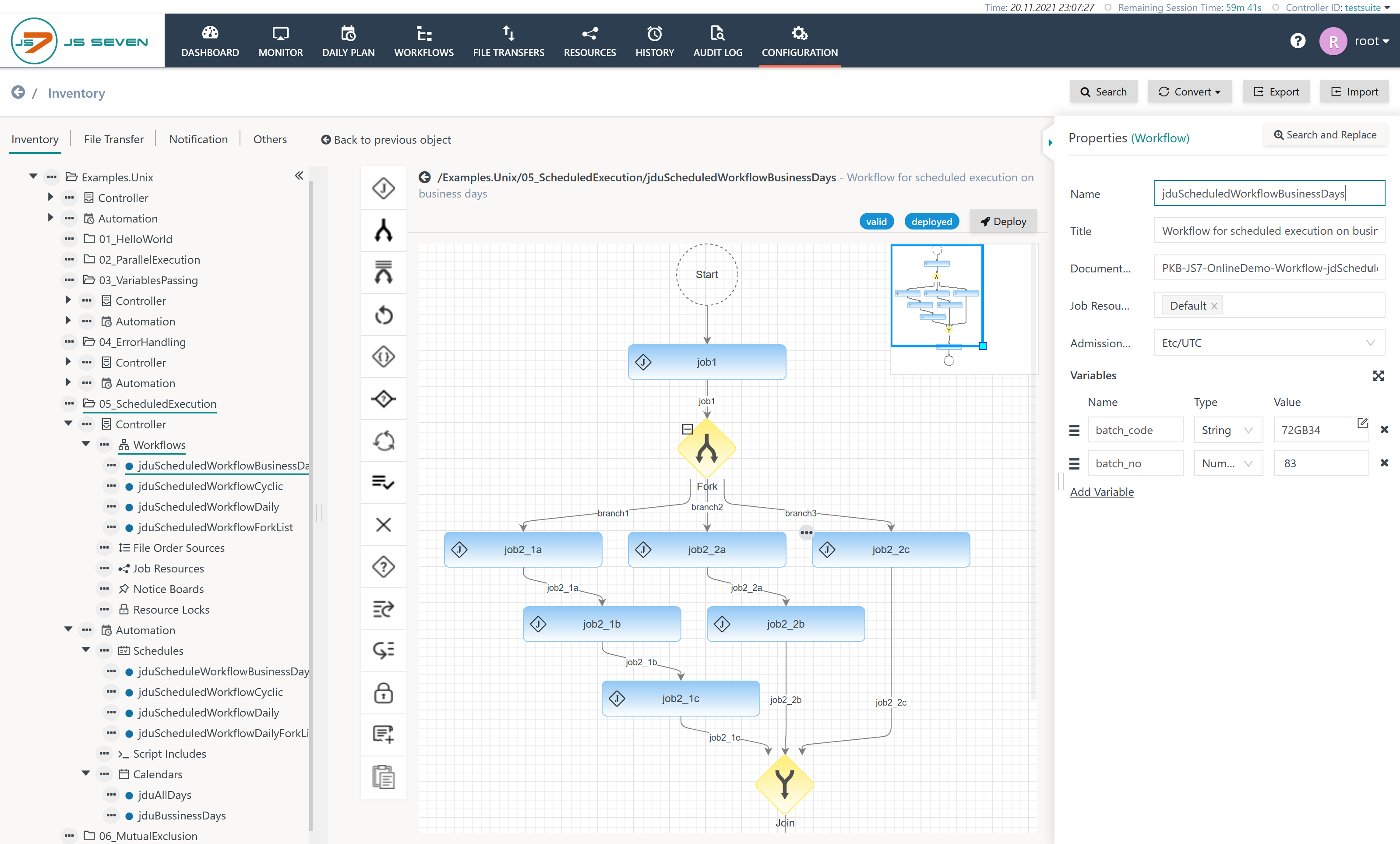 Object Areas and Object Types are represented with the folder hierarchy:

Note: Object names in JS7 are unique across folders per object type. This is required to ensure consistent object dependencies, as described in the next section. For example, a workflow and a job resource with the same name can co-exist, two workflows with the same name are not allowed.

A number of objects include dependencies that are managed by the inventory:

Object dependencies require that all dependent objects are available with a Controller. For example, if a Workflow references a Job Resource, then the Job Resource has to be available for the Controller at the point in time of deployment of the Workflow:

Note: For workflow dependencies, for example for the conditional execution of jobs, see JS7 - Workflow Instructions.

The deployment process includes digitally signing and transferring any number of objects to one or more Controllers.

Folders can be renamed and can be relocated.

The popup window asks for a new name of an existing folder:

The popup window allows the folder's name and path to be changed:

The popup window allows the names of objects available with the indicated folder to be changed:

Objects can be renamed:

An object's name and path can be changed when renaming an object from its action menu.

The popup window asks for the new name for an existing object:

The popup window allows an object's name and path to be changed:

Note that jobs are not objects but are available within a workflow from the JS7 - Job Instruction.

Jobs can be copied by using the job's action menu like this:

Objects can be copied or moved to the same folder or to a different folder.

When pasting an object then a new object name has to be specified. Object names in JS7 are unique across folders - for details see chapter Object Naming Rules. Pasting an object invokes the following popup window:

Note the wording used with JS7:

The handling of Deep Copy and Shallow Copy is performed like this:

Such operations are used for JS7 - Rollout of Scheduling Objects across environments.

Repository operations include storing, updating and deleting scheduling objects from a Git repository.

The operations in this section are related to JS7 - Deployment.

The operations work recursively for all sub-folders.

This operation transfers scheduling objects to Controllers and respective Agents.

This operation allows the deletion of previously deployed objects from Controllers and respective Agents.

The objects in question are not removed from the inventory.

Any objects that have been previously deployed are deployed once again.

This operation can be applied for example after the loss of Controller journals.

This operation retrieves the deployment status for each object by synchronizing the status in the Controller and the inventory.

This operation is available for Automation objects that are not deployed to Controllers and Agents but which are used by the JOC Cockpit.

For example, if a Schedule is released, then it will be considered by JOC Cockpit when creating the Daily Plan.

This operation is available for Automation objects that have previously been released. In fact it is an "undo" operation that reverts the release operation:

The trash is available from an icon with the topmost level of the inventory tree:

icon indicates the trash. When clicking this icon then the tree switches to display objects available with the trash:

In trash mode the inventory allows objects from the trash to be Restored or to permanently Deleted.