Trigger Files are typically zero-byte files that are created to trigger execution of a workflow. A workflow can remove such files at any point in time.

Data Files are processed by jobs in a workflow, for example to import reporting data into a data warehouse. Such files are (re-) moved only after processing by their respective jobs.

For both Trigger Files and Data Files the workflow is responsible for removing an incoming file before completion of the workflow.

The File Order Source is a configuration object that holds the directory and file pattern to be watched for by an Agent and that assigns resulting file orders to a workflow.

File Order Sources are managed in the Configuration -> Inventory view like this:

For incoming files the JS7 File Order Source provides a built-in variable $file that holds the path to the incoming file. This variable does not have to be declared but can be used for example to create an environment variable that is used from a job script: 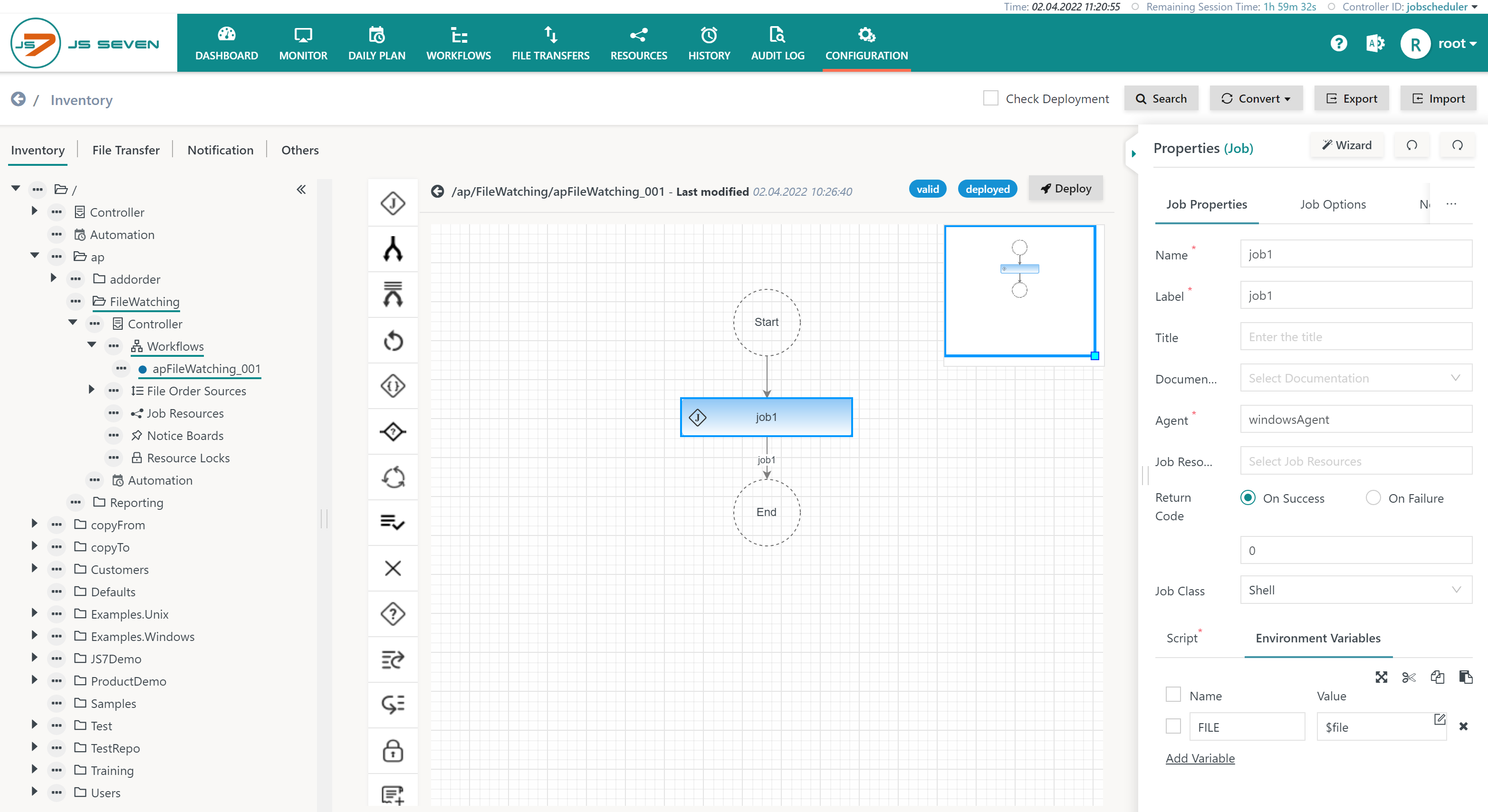 In the job script the environment variable FILE can be used like this: 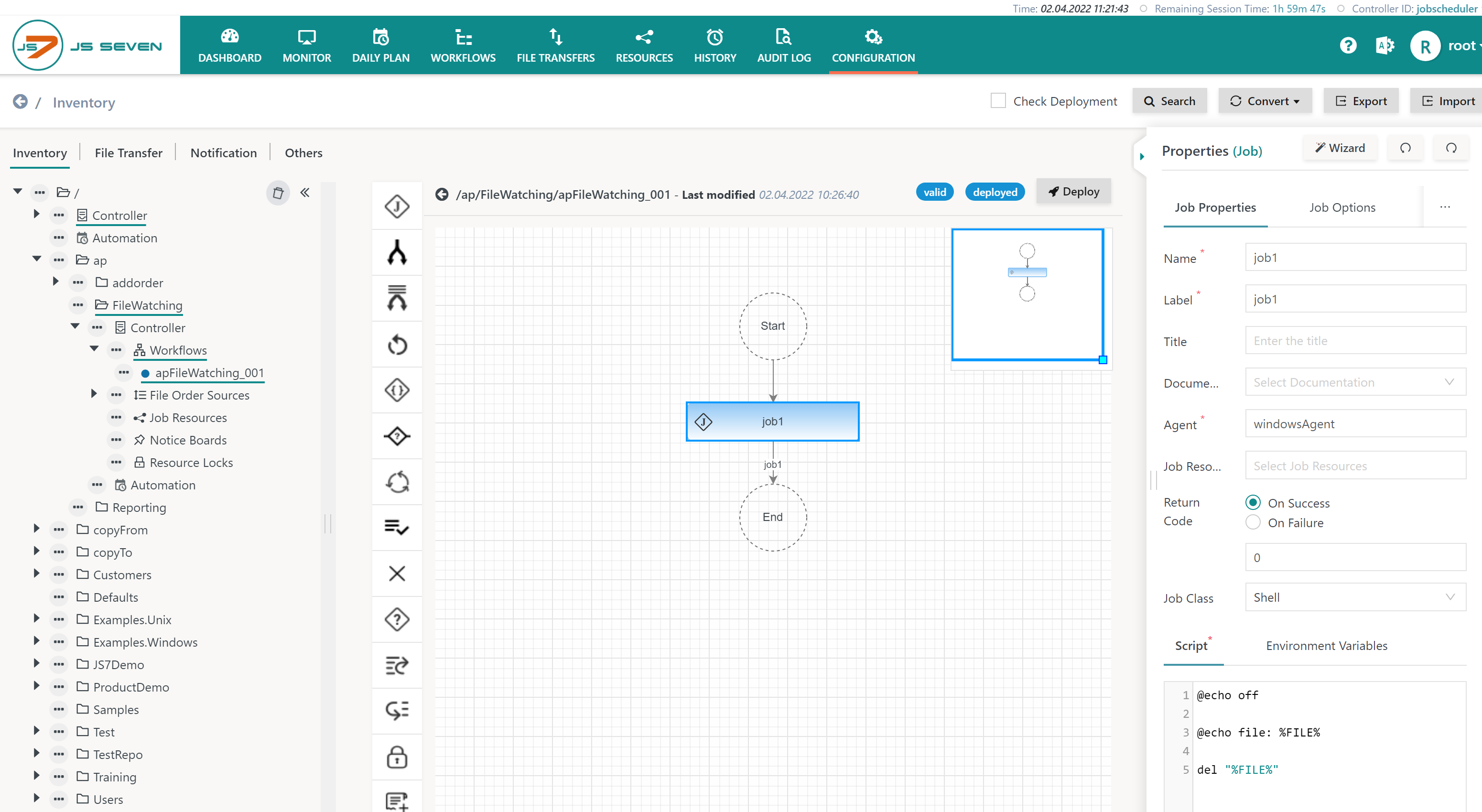 The built-in $file variable holds the full path of the incoming file, for example /tmp/incoming/test.txt.

Users who want to use a file name such as test.txt instead of the full path can configure their workflow like this: 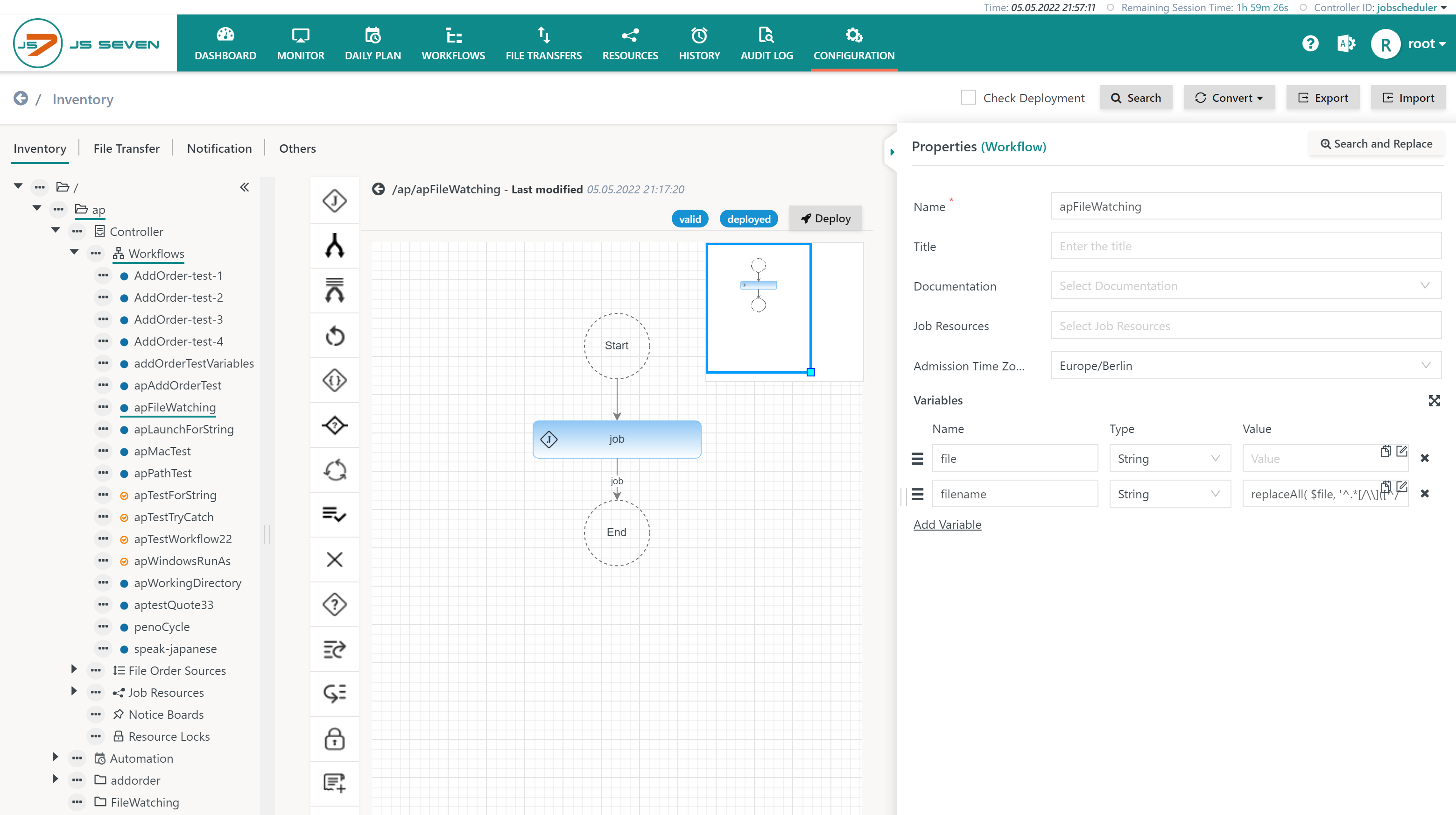 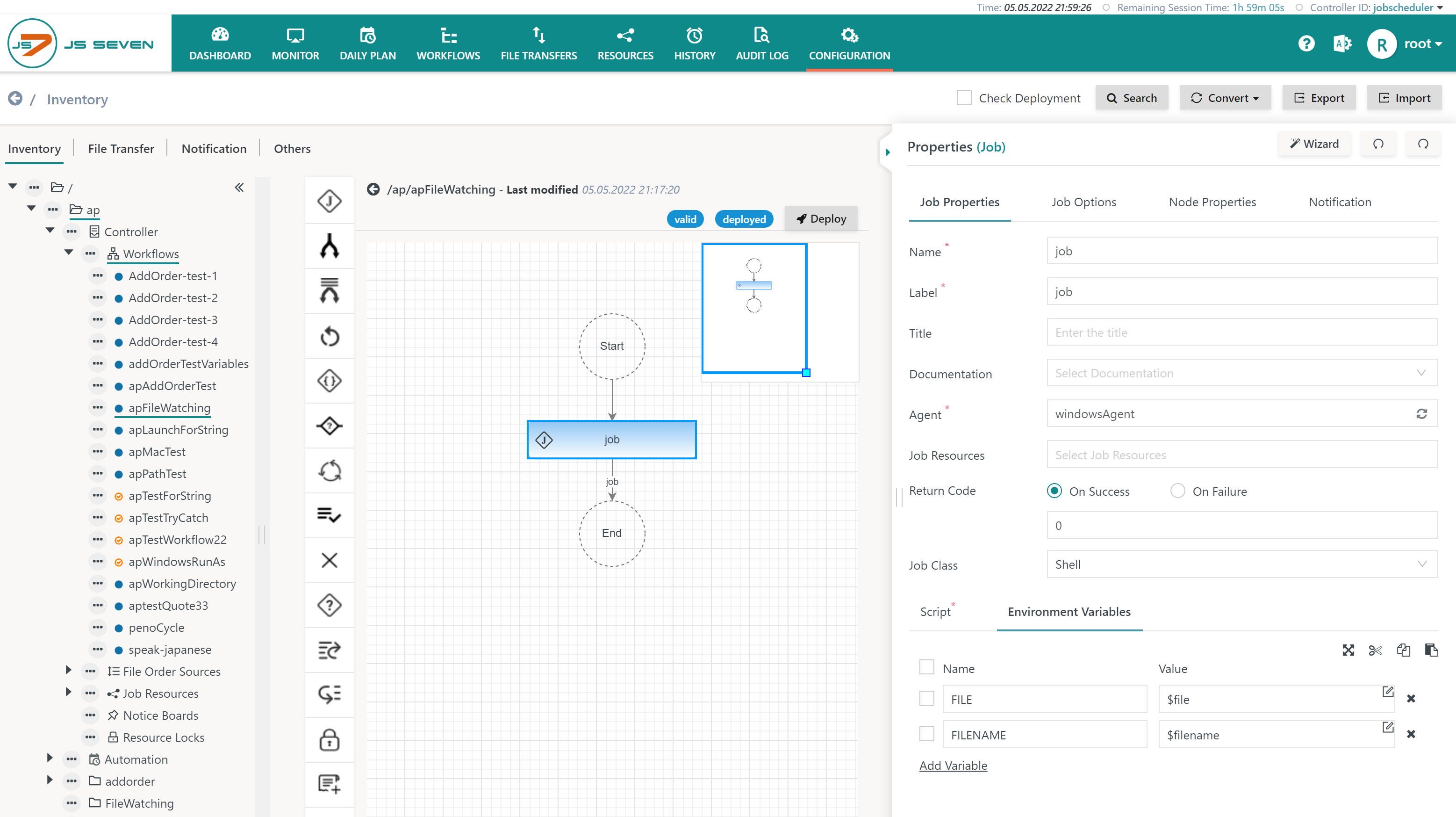 In the job script the environment variables FILE and FILENAME can be used like this: 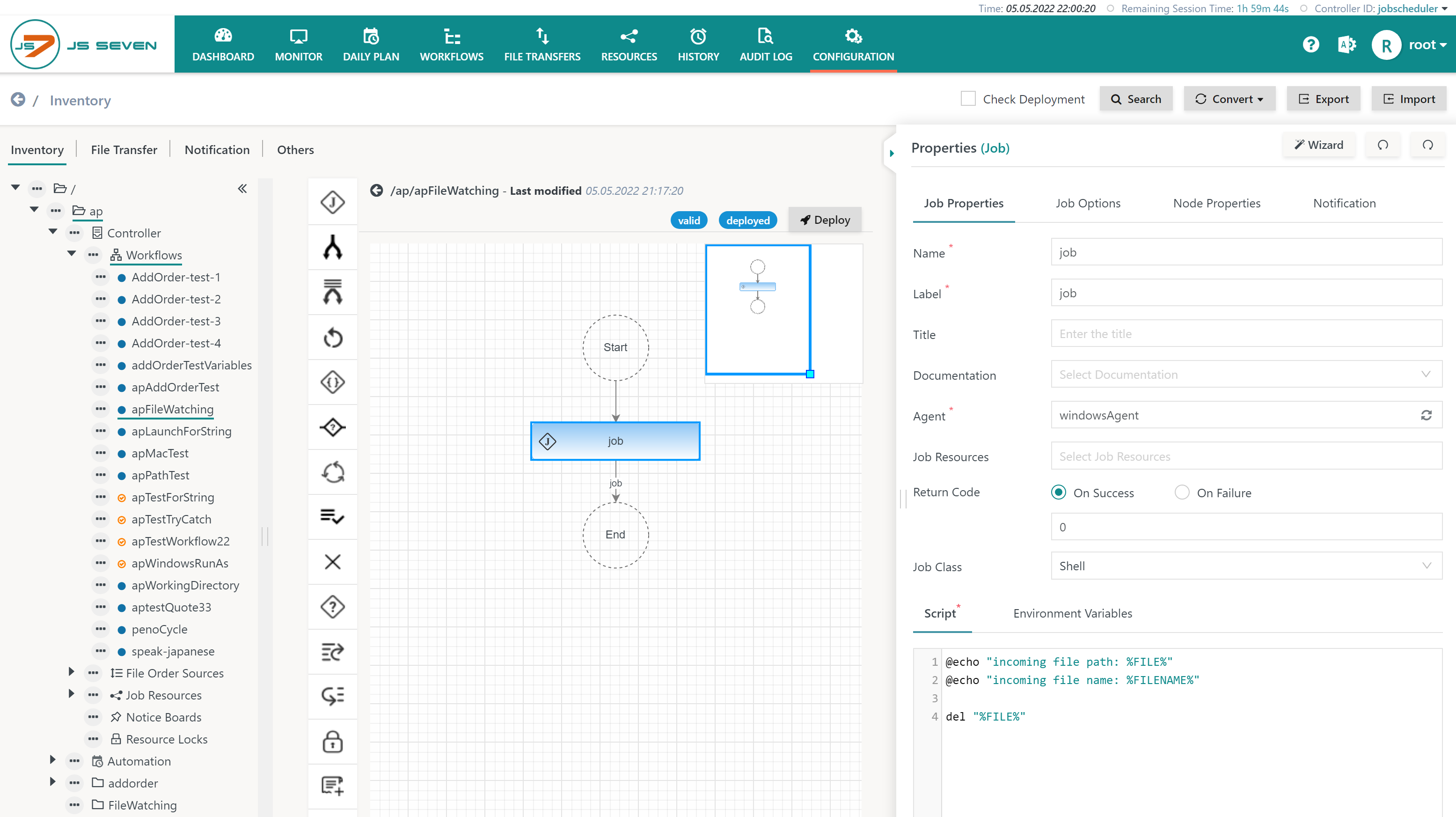 The JS7 Agent applies the following procedure for the timely acceptance of incoming files:

When an incoming file arrives in a directory then the file might not have been completely written at the point in time of appearance.

The best way for a client application to handle this situation is to make a file appear in an atomic transaction, for example to use a temporary file name and to rename the file after it has been completely written. Agents trigger files by patterns and therefore will become aware of a file only when the file path matches the pattern.

Should it not be possible for a client process that writes a file to rename the file after completion then the Agent implements a delay to check the steady state of an incoming file.

It is not considered good practice for a client application to make files with the same name appear and disappear in short sequence. However, the situation will be handled by the Agent that creates additional file orders.

If an Agent was not available when a file has been added to a directory then after start of the Agent it will pick up the file and will create a file order.

If the Controller is not available at the point in time when a file order is created then the Agent:

JS7 does not move or remove files, it's the workflow's responsibility to guarantee that on completion of a workflow the incoming file is no longer present.

If an incoming file is still present on completion of the workflow then the file order is moved to a COMPLETED state.