YADE can be accessed from the JobScheduler using one of the YADE JITL jobs, via the YADE API. The JITL jobs are pre-configured job templates that can be used to rapidly develop job scheduling operations and are provided as standard with every JobScheduler installation package.

The other tutorials in this series are:

The screenshots used in this tutorial were made using JobScheduler 1.11.

This tutorial describes how to configure the YADE JITL Job to carry out a simple file transfer operation - transferring all the files found in a folder on a remote server to the local file system. This operation described has already been used in the The YADE Client Command Line Interface - Tutorial 1 - Getting Started, and involves the transfer of files from the online SOS test server to the user's local file system. The test server server allows read-only FTP and SFTP access and has been installed to help users get their jobs up, running and tested as quickly as possible.

Note that to get the file transfer operation described in this tutorial up and running, your firewall(s) will need to allow file transfer via ports 21 (for FTP) and 22 (for SFTP).

A separate installation of YADE is not required for this tutorial, the YADE JITL Job uses the JobScheduler's own YADE.

This tutorial describes the individual steps required to configure the Job, Job Chain and Order objects used in the examples. In addition, a completed configuration can be downloaded by users that just want to see how the examples work:

The download archive contains three sets of JobScheduler elements, each made up of a Job, a Job Chain and an Order. Each set of elements has a common suffix: _1, _2 or _3 and provides a working configuration for each of the three examples described in this tutorial:

The download archive can be unpacked and the contents copied to your JobScheduler live folder where they can be run with one minor change:

Configuring the JITL Job in JOE

The first three steps have already been described in detail in the JobScheduler - Tutorial 2 - Editing a Simple Job with JOE tutorial and are therefore only summarized here:

Run the Order in the JOC Cockpit

The procedure for running this Order is the same as already described in other tutorials in this series:

If an Order ends in error the Error Text can be conveniently read in the History view by clicking on the dark grey triangle to the left of the Order ID as shown in the next screenshot:

Firewalls can cause problems and may block FTP file transfer if the necessary ports are not open.

In addition some firewalls require that FTP passive mode is used. An error message such as:

is likely to be avoided if JOE is used to add a passive_mode parameter with value true to the parameters that were set for the yade_jitl_job_1 job as described above.

The default setting for the passive_mode parameter is false.

As with the simple file transfer using FTP protocol and password authentication described above, this job downloads files from the SOS demo server and saves them on the local file system. The configuration of the YADE Command Line Client to carry out this operation was described in The YADE Client Command Line Interface - Tutorial 6 - Public / Private Key Authentication tutorial and we recommend that you follow the instructions contained in that tutorial to download and install the necessary rsa private key file.

The YADE JITL Job can also be configured to use file transfer configurations saved in a file that is independent of the JITL job. This has the advantage that one instance of the configuration can be tested and reused in a number of JITL jobs.

Note that up to and including release 1.10 of YADE and JobScheduler both the YADE JITL job and the Command Line Client save configurations in the form of one or more Profiles in a text-based settings.ini file. From release 1.11 onwards this approach will be replaced with an XSD schema-based XML file. See the YADE User Manual - Using the YADE Client article for more information about this change.

Profiles can be called from other Profiles, which means that a system of reusable configuration fragments can be built up. This is described in the Example of a global profile with fragments article.

The profile and settings file are specified with parameters of the same names in the JITL job Parameter form, as shown in the screenshot below: 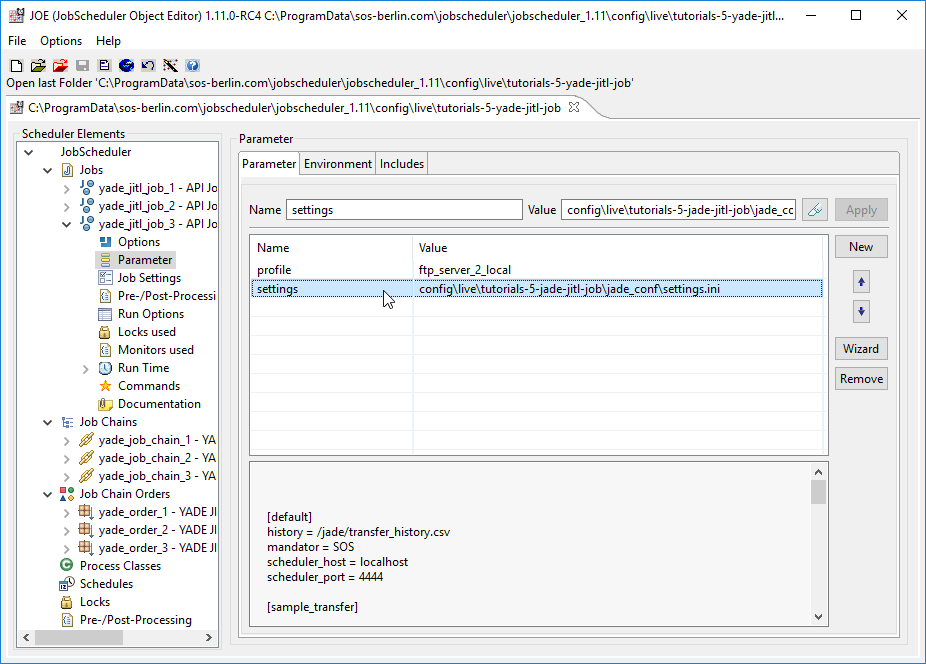 The screenshot also shows that a new Order, Job Chain and Job have been configured for this example.

The full settings.ini file as included with the example download is listed in the following code block:

Error handling, notifications and monitoring for the YADE JITL Job can be handled on two levels:

A brief introduction to both approaches is presented below.

The JobScheduler comes with a number of methods for error handling. These include:

See the Error handling article for a list of links to articles describing these features in detail.

JobScheduler comes with its own mail client which it can use to send notifying e-mails in the event of, for example, jobs ending in error.

See the Notifications article for a list of links to articles describing the notification features in detail.

See the Monitoring article for a list of links to articles describing the monitoring features in detail.

YADE has a limited number of parameters that can be used to provide error handling:

Definitions for these parameters are provided in the JITL Job Wizard Job Parameter form.

Definitions of these parameters can be found in the Parameter Reference under their new names - e.g. to, bcc, etc.

Two main methods for polling for the presence of a file are available:

The full documentation for the YADE JITL Job can also be found in the JITL Jobs by topic article.

The lower pane of the JITL Job Wizard Job Parameter form (cut off in the screenshots above) shows an extract from the legacy and in part deprecated parameter documentation when a parameter that has been selected using the wizard is active. As already mentioned, we do not recommend using the wizard and we also do not recommend using its documentation.

An alternative reference source, with more reliable parameter descriptions can be found in the YADE Parameter Reference. Note that the version online has been written using the parameter names that will be introduced with the changeover to XML-based configuration in Release 1.11, and that we have withdrawn the legacy (i.e. settings.ini file based configuration) YADE parameter reference. However release 1.11 does not bring a major change in the functions of the YADE parameters - only their names and how they are configured is being significantly changed. Therefore we have made a Parameter Mapping available that shows the settings.ini file parameter names and their corresponding XML-based ones. The XML names can then be used to access the YADE Parameter Reference, if there are aspects of parameter use that is unclear.