Previous tutorials in this series have described the configuration and use of Order Jobs. However, there is another route to starting tasks with JobScheduler but first of all, a little background information ....

JobScheduler comes with two types of job that can be used to carry out workflow automation tasks - Standalone Jobs and Order Jobs.

Order Jobs are run in Job Chains and can be executed both sequentially and in parallel. Order Jobs require an Order before they can run. Orders are triggers that start a Job Chain and convey information about the state in the job chain corresponding with the job that is being run. Orders can also have a payload of parameters that are processed by individual Jobs. These concepts are explained in more detail in our Concepts for jobs, job chains and orders article. In addition, our Job Chains article illustrates some of the basic Job Chain patterns that can be implemented with JobScheduler.

How are Jobs, Job Chains and Orders Configured?

Other tutorials in this series

There are two ways to Configure the Standalone Job for this tutorial. Either:

Downloading and Installing the Configuration File

The Configuration file for the Standalone Job can be downloaded from jobscheduler-tutorials-6-standalone-job.zip.

You have successfully configured and run your first Standalone Job.

In the following example a Standalone Job is configured to start daily at 12:00 o'clock and at 14:00.

You will find the Run Time->Everyday function in the element tree in the left hand pane of JOE: this is a sub-element available for both Jobs and Orders. Use the New Period button (positioned on the right hand side) to add a new start period. Use the Apply Period button to save your input after you have selected Single Start  12:00:00 in the Start Time field. Repeat this procedure for Single Start 14:00:00. 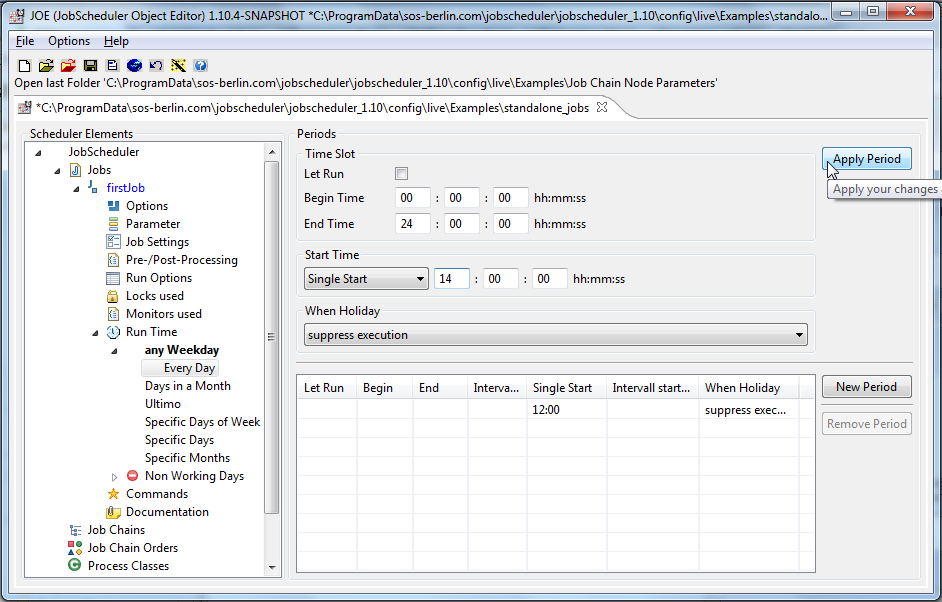 Note that in addition to the fixed start times (Single Start), it is also possible to set the following starting modes:

Standalone Jobs can still be started manually, regardless of whether a start time or run period has been set. It is also possible to combine the scheduled starting of a Standalone Job with Directory Monitoring.

The code used to specify the firstJob job at the times specified in schedule1 and with the Directory Monitoring also described is shown in the code block below: