The Resources View provides access to JobScheduler objects that are not directly bound to specific Jobs, Job Chains or Orders. These are Agent Clusters, Events, Locks, Process Classes, Schedules, Calendars and Job Documentation.

Only users whose accounts have the necessary Permissions will be able to access and configure individual Resources sub-views.

See the JOC Cockpit - Authentication and Authorization articles for more information about Permissions.

Agent Clusters are one or more JobScheduler Agents that are accessed by a common Process Class. The Process Class defines the address or addresses - i.e. the URIs - of the individual Agents as well as the maximum number of tasks that the Cluster may execute at any one time.

The next screenshot shows the Resources / Agent Clusters view with three Agent Clusters on a common host and two of the Universal Agents offline. The information presented in this view is purely informational (i.e. non-interactive) and is updated in near real-time. 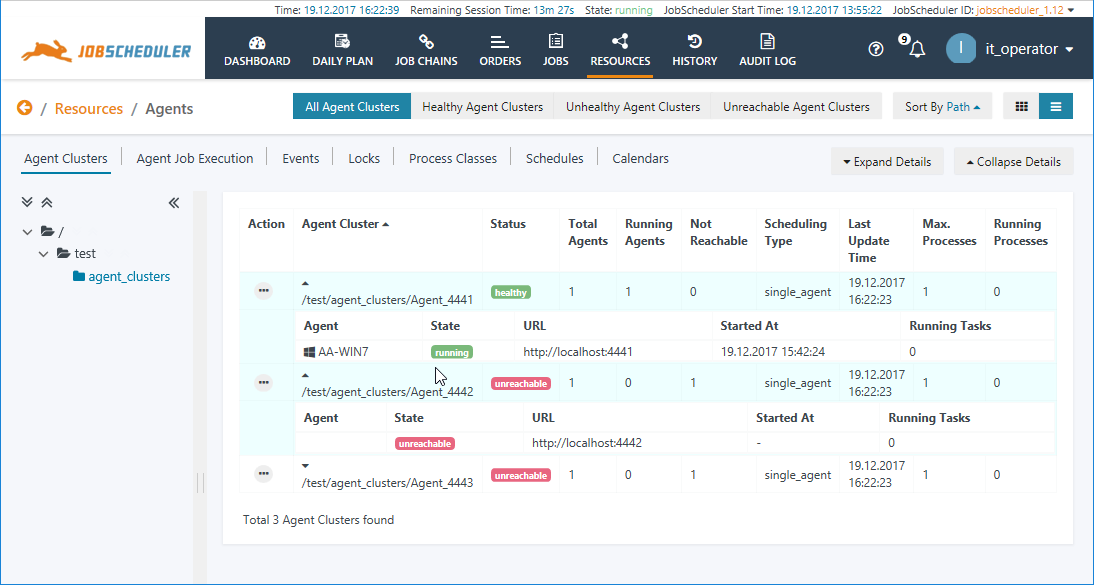 Agent Jobs Executed view shows the sum of all the tasks executed on Agents controlled by the Masters reporting to the JOC Cockpit.

This information is automatically collected by the JOC Cockpit and is relevant to holders of commercial subscription licenses. A convenient Export in XLS format function is available with the button at the top right of the view.

This information also allow the number of tasks executed with different Agent URLs to be monitored, and could be used as part of a simple accounting system.

JobScheduler Event handling is a mechanism for implementing complex dependencies between jobs or between jobs and external events.

The Resources / Events view allows Events to be created and managed and shows the events. It shows all Event Objects that are listed in the Reporting Database - i.e. for all JobScheduler Masters - and which have not yet expired.

The information shown in this table is automatically updated by the ./sos/events/event_processor Order, which runs every 5 minutes and when a new Event is created or deleted.

A comprehensive Add Event function is available as shown in the next screenshot: 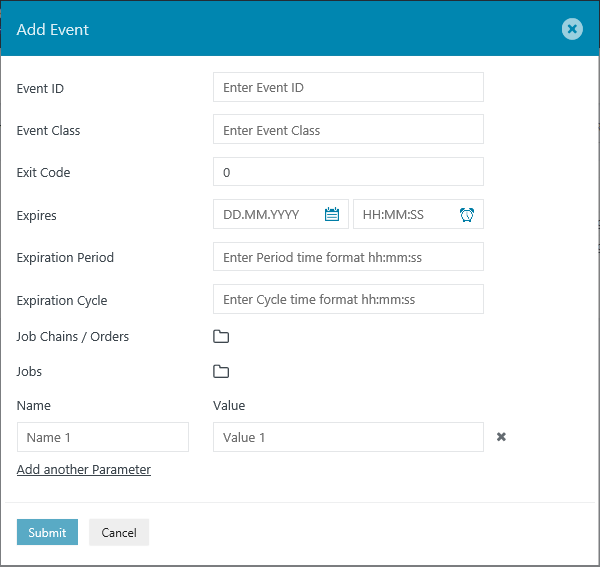 Note that changes to events - i.e. addition and deletion - carried out in the Events view take place asynchronously - there is a short delay before feedback is obtained that changes have been implemented.

Locks limit the number of jobs that access the same resources, e.g. databases, in parallel.

Locks allow mutual exclusive access, i.e. jobs wait without any consumption of CPU for a lock to be released.

Locks are configured in the JobScheduler Object Editor JOE. The JOC Cockpit Resources / Locks view is purely informational as can be seen in the screenshot below.

Values shown in the Max. Non-Exclusive column are configured and static.

Values in the Number of Lock Holders and Number Opened columns are dynamic and reflect the current situation in near real-time.

See the Locks article for more detailed information about Locks.

Process classes limit the number of jobs that are running concurrently.

Process classes specify remote JobScheduler Workload instances and Agents on which jobs should be executed.

The Resources / Process Classes view displays information about the Agent Cluster that a Job or Job Chain is to be executed on (if any) and the maximum number of processes that a task may use as well as the location - i.e. the Path - of the Process Class object in the JobScheduler Master's live folder.

The screenshot above shows one Process Class - agent_cluster. This view is purely informational, i.e. non-interactive, and the Number of Processes column shows the current number of processes being executed for each Process Class in near real-time.

In addition, when a process class is being executed, detailed information is dynamically added to the table - the Agent, Job, Process and Task IDs and Running Since columns shown in the screenshot.

Important: Schedules are being replaced by Calendars and are deprecated as of Release 1.12. See JS-1754 - Getting issue details... STATUS for more information.

Schedules are run-time configurations that can be used to define the start times of jobs and orders.

The Resources / Schedules view not only provides information about the current Schedules but allows these Schedules to be:

Schedules and Run-times are mutually exclusive.

Schedules can be substituted in the JOC Cockpit by:

Schedules, like all JobScheduler objects, are saved as files within the JobScheduler Master's live folder. Scheduler substitutions can also be configured at this level, either using JOE - JobScheduler Object Editor or by editing the substitute schedule object file using a text editor. The JOC Cockpit can take account of substitution at this level. The following screenshot shows a folder in the Resources / Schedules view with three schedules: 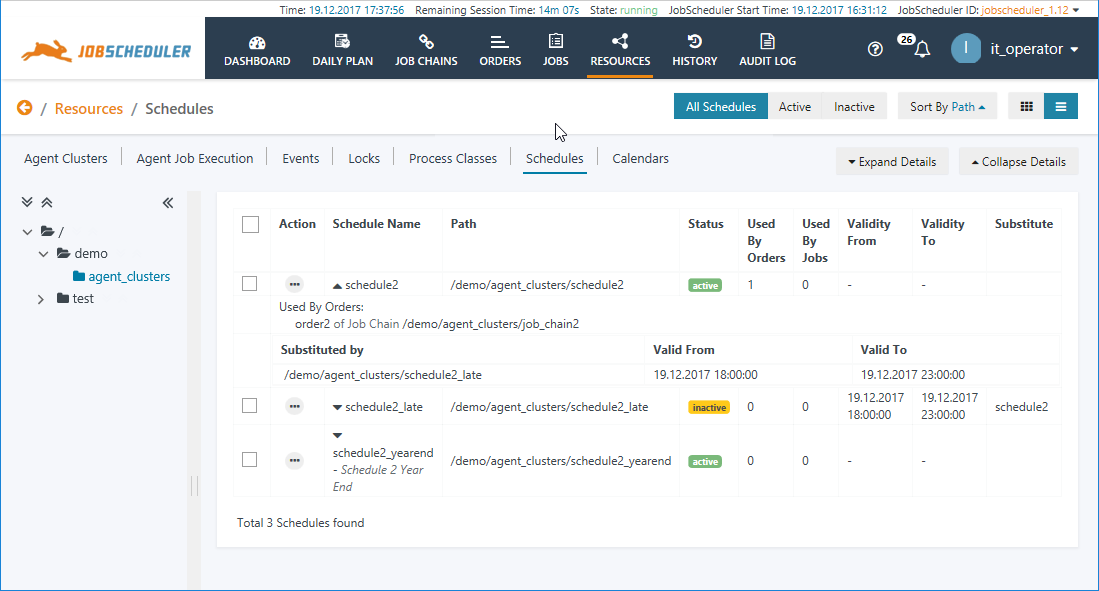 Each of these Schedules can be further substituted as described above.

See the Schedules article for more detailed information about Schedules.

Calendars specify the days on which Jobs and Orders are to be executed on and provide more sophisticated configuration than is possible with Schedules.

See the Calendar Management article for more detailed information about Calendars and their configuration and management.