How to dynamically specify a remote JobScheduler instance

There are a number of methods available for controlling job execution on remote servers with JobScheduler. The most important of these are:

The ease of this method means that job execution on remote JobSchedulers can be more flexibly allocated than with process class based methods. In particular, it allows the decision about which JobScheduler a job is to be executed on to be made dynamically, for example, depending on the result of the preceding job.
In addition, only one instance of the job and job chain need to be defined in the live folder of the 'main' JobScheduler, thereby considerably increasing flexibility and reducing maintenance.

A scheduler.remote_scheduler example has been prepared and can be used to set up a simple remote scheduling demonstration.

To run the example you only need two JobSchedulers, one of which is to be used as the 'main' JobScheduler and the other as the remote.

Note that scheduler.remote_scheduler only works when both the main and remote JobSchedulers are version 1.7 or newer.

To get the example ready to use, simply unpack the 'remote_scheduler_variable_demo.zip' file into the 'live' folder of the 'main' JobScheduler that will be controlling the remote one(s).

If you then open the folder containing the example in JobScheduler's JOE interface you will see that the example consists of a job chain ("Job_Chain_1") with three nodes ("Start", "Job_1" & "End") and two orders:

These objects can be seen in the following screenshot from JOE: 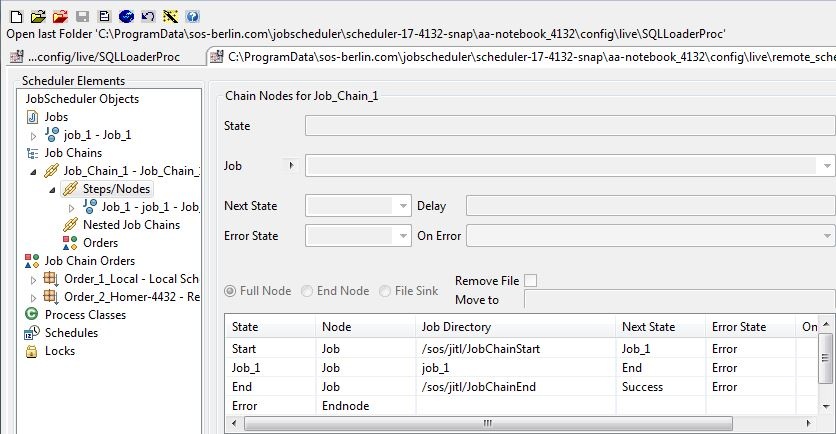 The job chain used for this example is quite simple as can be seen in the following diagram:

When "Order_1_Local" is started - for example, using JobScheduler's JOC interface, "Job_Chain_1" will be executed on the local host - i.e. the JobScheduler in whose file system the demo files were unpacked.

The order "Order_2_Homer-4432" causes the same job chain to be executed by the JobScheduler listening to port 4432 on the server "homer".

The JobScheduler that is to execute the job chain is specified as an order parameter as shown in the following screenshot.

Alternatively, the XML code in the the Job_Chain_1,Order_2_Homer-4432.order.xml file can be edited as follows:

To get "Order_2" to be executed on a remote JobScheduler in your network simply change the scheduler.remote_scheduler parameter in either JOE or directly in the "Job_Chain_1,Order_2_Homer-4432.order.xml" file to a suitable address and start the order in JOC. This was shown in the next screenshot: 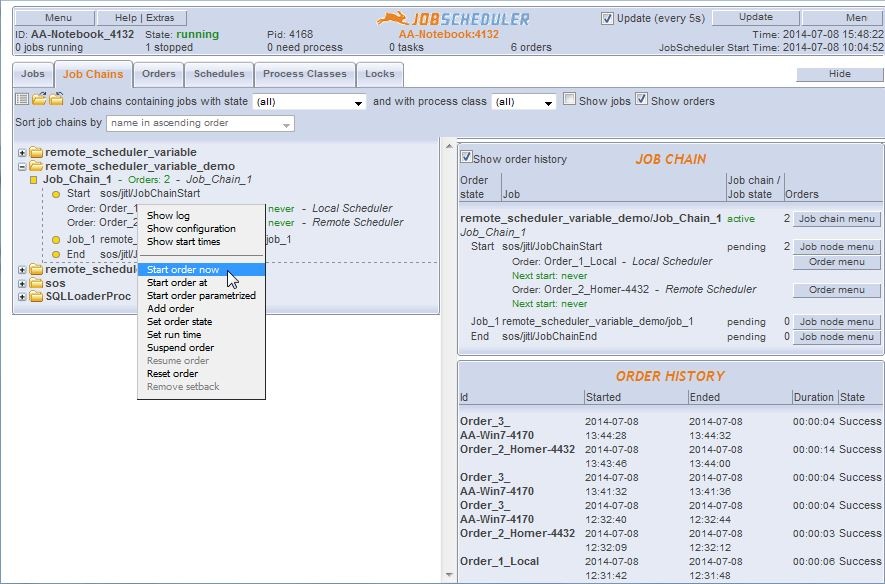 Once the order has run, open the log file and you will see that in the example "Job_1" causes either COMPUTERNAME = yourComputerName  (for a Windows computer) or HOSTNAME = yourHostName (for a Linux computer) to be written to the file.

A scheduler.remote_scheduler parameter is not set in the "Order_1_Local" order and therefore when started with this order "Job_1" will be executed by default on your local computer. The name of your local computer or host (depending on the operating system - see above) will be entered in the log file.

Application in a Production Environment

In a production environment, particularly one where a large number or remote servers were being addressed, the scheduler.remote_scheduler parameters would be saved in an .inc file, which would be loaded as required.