The JOC Cockpit Resources / Calendars view has import and export functions to allow reliable Calendar deployment, for example, from a source, such as an Integration System (INT, UAT) to a target, such as a Production System (PROD).

In general, such a deployment will involve 3 - 4 steps:

Details of the deployment procedure will depend on:

Note that Calendars are always exported with usage and folder information - i.e.

"New" Deployment of a Calendar

Consider the situation where a new Calendar has been tested in an INT environment and is now to be deployed to a PROD environment.

The following configuration will be used to demonstrate deployment of "new" Calendars:

Calendar Export is carried out from the Resources / Calendars view of the JOC  Cockpit:

The content of the .json file showing the exported Calendar and usage information is shown in the code listing below:

The Import procedure is started in the Resources / Calendars view of the target system by simply clicking the Import Calendar button (any folder can be selected in the folder tree) as shown in the screenshot below.

This will open a standard browser-based file import procedure allowing file selection either by drag-and-drop or by menu.

Once the file has been selected an Import Calendar modal window will open as shown in the next screenshot:

As can be seen from the screenshot, selection of individual Calendars is allowed during the import.

After the import has been completed the Calendars will be shown the folder specified in the Path parameter alongside the cal_fr calender that had already been configured on the PROD system.

Behavior of the Import Function

The import function is conservative, preserving existing configurations on the target system where appropriate.

In addition the imported Calendar(s) will be shown in the Assigned Calendars modal window for the relevant Order as can be seen in the next screenshot:

In the Job Chains view, the Set Run-time modal window will show the Calendar(s) that have been imported as shown in the next screenshot, where they can be seen in the list of Frequencies along with any Period and Restriction information that has been imported: 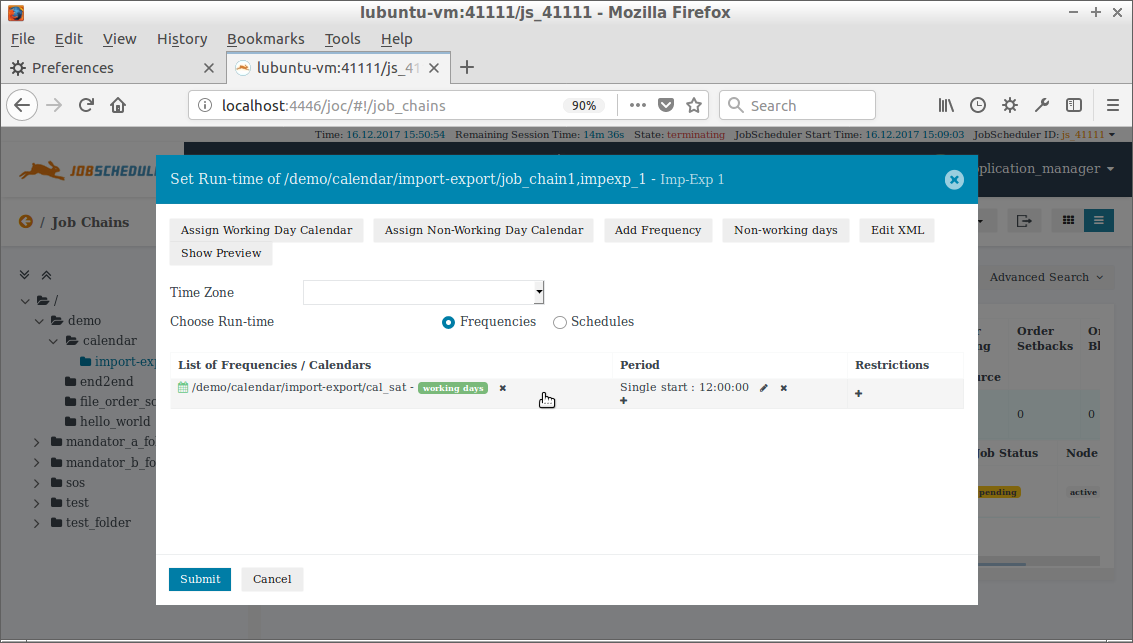 Note that the imported Calendars are not yet included in the Daily Plan.This is described in the next section.

The Set Run-time Submit button should now be clicked to cause the "new" Calendar to be integrated into the Daily Plan.  Depending on the complexity of the Daily Plan, it can take up to a minute before the Next Start dates, as shown in the next screenshot (in green) or the start dates in the Order's Show Daily Plan function are updated.

Deployment of a Calendar Update

Consider the situation where a Calendar is already in use in a production environment and requires to be updated.

A typical scenario would be where the Calender is to be extended for a further year and the non-working days for that year added.

In the following example, a Working Week Calendar buswk_hols has been configured for 2017 (Valid From 01.01.2017, Valid To 31.12.2017) with a Monday to Friday working week configured as an Included Frequency and the German national holidays for 2017 as an Excluded Frequency. This Calendar is deployed on the PROD System and  appears in the Resources view as shown in the next screenshot:

The updated and tested version of the buswk_hols Calender is installed on the INT system with the same Path parameter value and is assigned to an Order with the same name as the assigned Order on the PROD system and the same Period and Restrictions.

The export procedure followed is exactly the same as that already described for the deployment of a "new" Calendar.

The following listing shows the exported buswk_hols Calendar .json with the new holiday information for 2018 and the updated Valid To parameter.

The Import procedure is also started in the same way as already described for the deployment of a "new" Calendar, via the Import Calender function in the Resources / Calendars view and using the standard browser file upload procedure to select the file.

The following modal window will open once the file has been read:

Note that the Calendar is shown with an orange "object already exists" warning.

If the update is to proceed the Calendar(s) to be updated should be selected and the Import button clicked.

This will cause a confirmatory window to open as shown in the next screenshot:

Note that the deployment procedure for updating an existing Calendar is as conservative as already described above for a "new" Calendar.

The next screenshot shows that after the update has been completed the 2018 National Holidays are available as a fully editable Frequency: 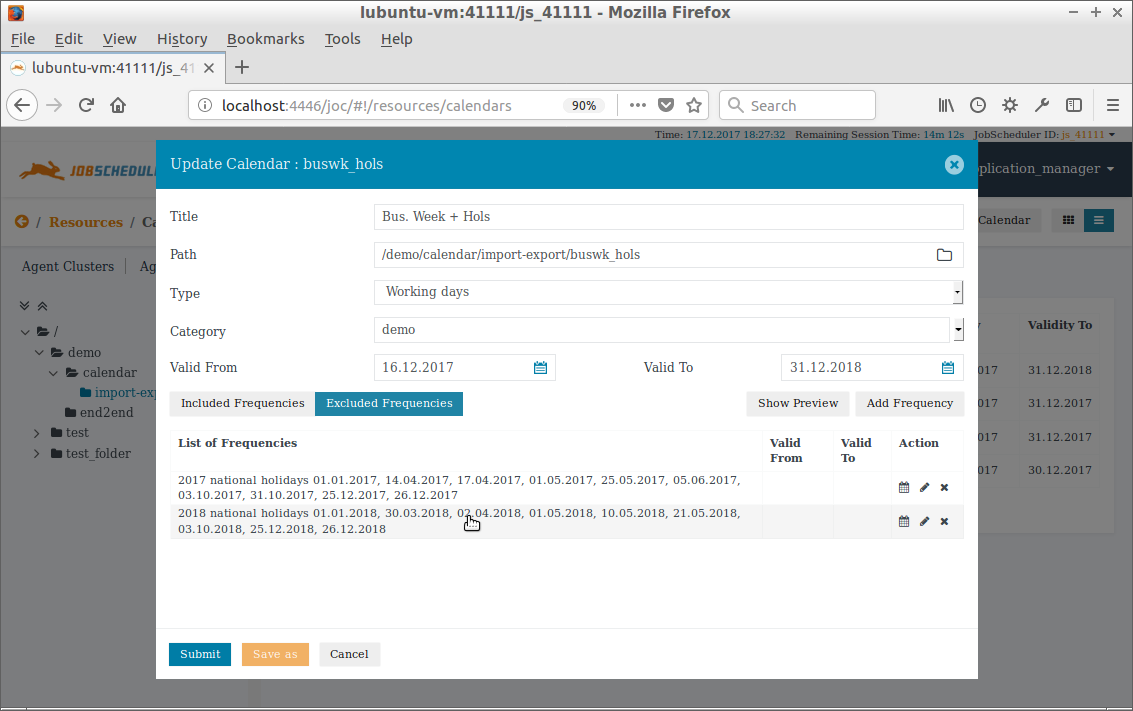 Note that in contrast with the procedure described for deploying a "new" Calender, when updating an already existing Calendar there is no need for the createDailyPlan Order to be run before the Daily Plan is updated. The next screenshot shows the Calendar after the update with the Validity To setting now changed to 31.12.2018.

The Set Run-time Show Preview function in the Job Chain or Order view for an Order or Job that has been assigned the updated Calendar can be used to check that the update has been correctly applied as shown in the next screenshot: