The Manage Accounts section of the JOC Cockpit is then accessed via the Profile Menu as shown in the screenshot below.

The Manage Accounts view has three main sections that are accessed via tabs:

These tabs will be described in the following sections.

The Accounts tab is opened first when a user selects the Manage Accounts view and lists all the User Accounts that have been configured along with the Roles they have been assigned.

The above screenshot shows the default root User Account which is the only Account that is configured after installation of the JOC Cockpit.

The main purpose of the Masters tab is to allow JobScheduler Roles and any Masters which these Roles will be restricted to be configured.

When the tab is first opened after installation of the JOC Cockpit it will appear as shown in the next screenshot:

The above screen shows seven default Roles that are provided with the JOC Cockpit. These Roles are intended to help system administrators get a realistic authorization configuration working as quickly as possible and can be modified as required. Roles shown in this tab under the heading default are valid for all JobScheduler Master instances in the environment.

Note that the default heading in the screenshot denotes that the roles listed under this heading are active for all Masters - the default setting.

If the Masters tab is opened by clicking on an Account Name in the Accounts tab (described in the previous section), the Masters Tab will show those Roles that have been assigned to that Account. The Account that is active is shown in the Account button, which can also be used to select and deselect Accounts.

Positioning the mouse over a role name blends in two links as shown in the screenshot above:

The main purpose of the Permissions view is to allow Folders and Permissions to be configured for each Role.

Folders are added using the Add Folder button shown in the background of the screenshot below, at the top right.

Folders themselves are selected from a simple tree view of the folders in the JobScheduler Master's live Folder. This tree view is opened by clicking on the folder symbol shown in the screenshot.

Two editors are available for the configuration of the Permissions granted for a Role:

The Main Section Tab is for configuring LDAP, Clustering and Session parameters and is briefly described as part of the LDAP Configuration article.

Once a User Account has been created for each of the default Roles, the Accounts view will look like: 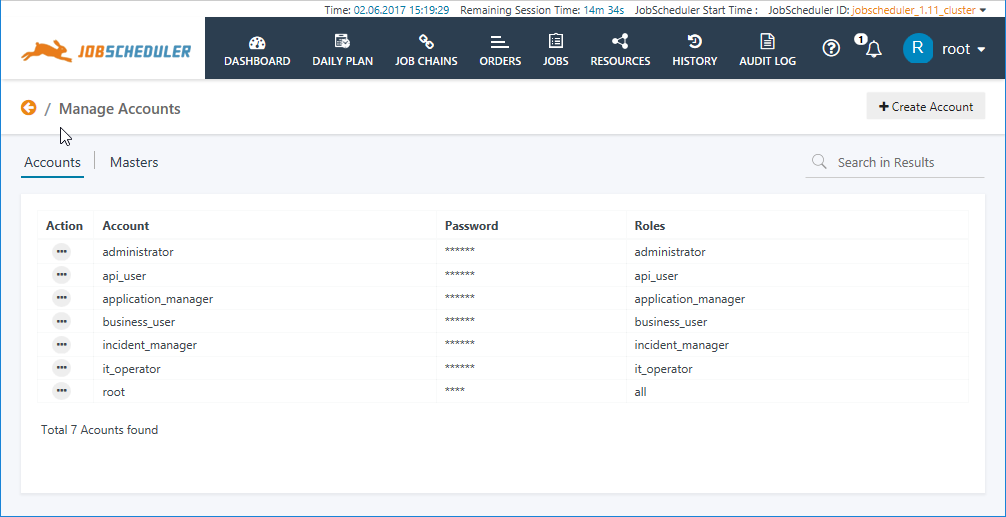 The root User can now be logged out via the Profile Menu and the other User Accounts used.

Note that as the default administrator Role is granted a limited Permissions set, the Main Menu Bar in the JOC Cockpit will only contain a link to the Dashboard view as can be seen in the screenshot below. In contrast, the root User Account (shown in the screenshots above) has links for a further seven views.

By default the administrator Role is granted Permissions for the Manage Accounts view and therefore the configuration of the User Accounts will continue using this Account rather than root. 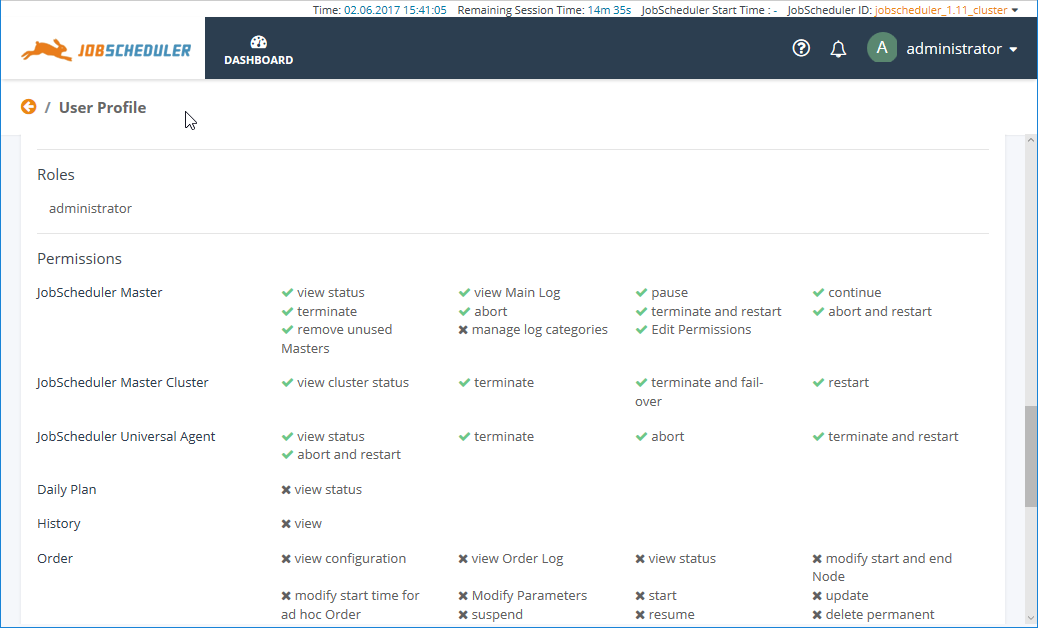 A matrix describing and listing the Permissions that are granted by default for the default Roles is available in the Authentication and Authorization - Permissions for the JOC Cockpit Web Service article.

In addition, the same article contains a link to a full list of all Permissions that can be granted.

System administrators will likely want to create and configure their own User Accounts and Roles, for example, to conform with an LDAP authentication system or to limit access to resources such as JobScheduler objects and logs.

It is often easier to create a new Roles, assign Permissions or Folders to these Roles and then create new User Accounts and assign Roles to them.

Configure Permissions and/or Folders for the Role

Consider the default business_user Role, which has the following permission:

This permission does not allow the business_user Role to access JobScheduler Master log files or parameters. These Permissions could be granted individually with the following:

The following Permissions can be set to allow the business_user Role to view JobScheduler Master statuses and log files but not parameters:

Alternatively, it may make sense in some situations to grant the Role a higher level Permission and then remove one or more specific Permissions. This approach is shown in the following combination:

Users have to have a Role with the following Permission - or higher - before they are able to log into the JOC Cockpit:

In the screenshot the demo_role Role has been assigned for the Master with the ID jobscheduler_1.11. and will appear in the Masters view as shown.

The interaction of default and Master-specific Permissions within the same Role can be illustrated as follows.

Folders are used to restrict User access to JobScheduler objects such as Jobs, Orders and Schedules. This means that, for example, Users can be restricted to accessing only objects for particular mandators / clients.

Folder Permissions are granted in the Permissions View. Note that before Folder Permissions can be saved for a Role, the Role has to be specified for a User. In the example below, a demo_user and demo_role have already been configured and the demo folder created ono the file system.

To open the Permissions view for a particular Role, first open the Manage Accounts view, switch to Masters and select the Role that is to be granted Folder Permissions. To do this, click on the Role name in the Roles list.

Check the Recursive box in the Add Folders modal window if required and then click on Submit.

Any User that is allocated this demo_role will now only be able to see JobScheduler objects in the demo_folder.

Note that the demo_user will only be able to log in to the JOC Cockpit if they have at least one Role granting them the following Permission:

Roles with Folder Permissions are often configured for Users in combination with default Roles. For example, if the demo_user described here was allocated the it_operator Role in addition to the demo_role, they would be able to carry out the tasks allowed by the default IT Operator Permissions but only for JobScheduler Objects in the demo folder and, if configured, its child Folders. See the Use Case below for an example configuration.

Consider the case where an Application Manager works for a mandator (client), in an environment where a JobScheduler Master is used for two mandators, A & B.

The JobScheduler Master live folder will have the following structure:

See the sections above for more detailed instructions about configuring Account Roles, etc..

When a user now logs in with the credentials for the mandator_a_am_user account they will only be able to access JobScheduler objects in the mandator_a folder as well as log and audit log information relevant to these objects. This can be seen in the following screenshot showing the Job Chains view:

Note that the mandator_a_role Role can be "reused" to restrict the access of other mandator-specific User Accounts that may be required to meet the full service requirement of Mandator A.

Note also that a download archive containing the relevant files to implement both use cases described in this article is available in the last section of this article.

Consider the case where a Business User account is to be configured for a mandator B where the account user can start and monitor their own Jobs and Orders.

The following configuration steps are carried out in the same manner as described in the previous example:

These steps mean that the Mandator B Business User will be able to carry out the operations allowed by the default business_user Permissions Set and will only be able to see their own JobScheduler objects.

The additional Permissions required for the mandator_b_bu_role are added in the Permissions section of the Managing Accounts view.

The following individual Permissions could be used to start Orders and Jobs and the other operations specified:

Alternatively, a more liberal approach could be taken and, for example, copy the Permissions that are granted by default to the IT Operator Role:

Configuration foles to create working examples of the above use cases can be downloaded from this link:

When the archive is unpacked three elements will shown:

Copy the two folders with all their contents to your JobScheduler's live folder. It is not necessary to delete any of the existing folders.

Restart the Jetty server to implement the changes in the shiro.ini configuration.

Each of the mandator folders contains a hello_world sub-folder with job chains and orders that are scheduled to run once an hour.

In addition the following mandator-specific Users have been configured: