What happens if the connection to your remote host breaks while a script is still running? How can the JobScheduler job which started the remote script know about that?

You can configure your existing SSH job chain to start the monitoring job chain, which then will monitor the task of your original job chain as well as the processes started on the remote host via SSH.

Configuration of the SSH

job to be monitored

A number of additional parameters have to be added to the job configuration before the SSH Job job can be monitored:

of the Cleanup job chain

A cleanup job chain with two jobs has to be configured to process the cleanup of the remote processes or the JobScheduler task.

The cleanup job chain consists of two jobs, one to read the pid of the connected shell from a temporary file on the remote host and one to check if the process or the JobScheduler Task task is still running. The temporary file will be generated automatically and deleted after processing. The second job also ends either the remote process or the JobScheduler task as appropriate.

After choosing the relevant class name from the list, configure a setback for the job. The setback will be used to restart the job according to the conditions found by the job (described above).

Configure the class of  the job in JOE as follows: 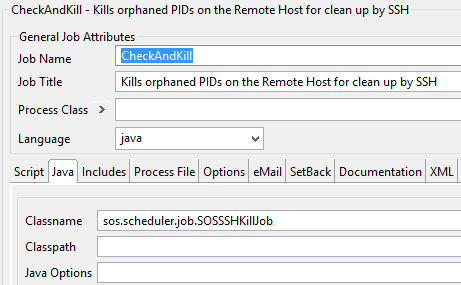